Layman May Not Open Decedent’s Estate Without Lawyer

A layman may not represent the legal interests of a decedent’s estate, the majority of a panel in the Appellate Court in Chicago has held.

The opinion drew a vigorous dissent from Justice Michael Hyman.  Citing forms provided to the public by circuit clerks in Lake, Kane and DuPage Counties, he said the contrary approach applied in Cook County “has no basis in law.”

The denial of a motion for substitution of judge for cause is an interlocutory order and cannot be converted into a final and appealable order by mere inclusion of the language required by Illinois Supreme Court Rule 304(a), according to the Appellate Court’s Third District.

Ruling in Marriage of Morgan, 2019 IL App (3d) 180560, the court alternatively held that a “written finding that the ruling was

‘appealable pursuant to Supreme Court Rule 304 and other appealable rules’ was not an express written finding in accordance with Rule 304(a)” and hence was insufficient to give the Appellate Court jurisdiction.

Rule 304(a) requires “an express written finding that there is no just reason for delaying either enforcement or appeal or both.”  “Simply mentioning appealability while vaguely referencing Rule 304” is not sufficient, the court said.

Sanctions Motion Must Be Filed Within 30 Days

A claim for sanctions under Illinois Supreme Court Rule 137 “must be asserted within 30 days of the judgment that conclusively resolved the claims in which the allegedly sanctionable conduct took place,” the majority of a panel of the Appellate Court in Chicago has ruled.

The dispute in Lakeshore Centre Holdings, LLC v. LHC Loan, LLC, 2019 IL App (1st) 180576, arose in a case where a judgment resolved all the claims in the plaintiff’s case against defendants, but there was an unrelated counterclaim that was not resolved.  The trial court granted a Supreme Court Rule 304(a) finding of appealability of the judgment on the plaintiff’s case, and it was appealed.  The defendants then filed their sanctions motion nearly five months later.

portion of Supreme Court Rule 137(b) which provides that “[m]otions brought pursuant to this rule must be filed within 30 days of the entry of final judgment, or if a timely post-judgment motion is filed, within 30 days of the ruling on the post-judgment motion.”  Where a Rule 304(a) finding is granted, that deadline is not tolled by the pendency of an unrelated counterclaim, the majority said.

Reasoning that it is “conceivable” that a lawyer lied under oath as to the existence of a third-party that he said was paying for his representation of the judgment debtor with “goodwill”, a panel of the Appellate Court in Chicago has overruled an assertion of the attorney-client privilege and affirmed a contempt order of a lawyer who refused to disclose the identity of the third party responsible for his defense of the judgment debtor. 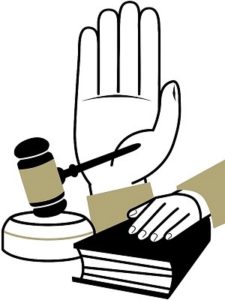 panel said the testifying lawyer raised the issue of privilege and the “party asserting the privilege bears the burden of establishing that it applies.”  It conceded that before the plaintiffs could serve a citation on the secret sponsor, “the record must contain some evidence that the third party possesses assets of the judgment debtor”, and there was none, but said that was not an impediment to disclosure because “plaintiffs cannot even attempt to put forward ‘some evidence’ until they know the identity of the third party.”

In an opinion that is devoid of reasons to doubt the attorney’s sworn testimony, the court reasoned that disclosure of the third party’s identity would “dispel any suspicion that [the attorney] might have invented this third-party client in an attempt to shield the debtors’ assets from discovery.”   It said it was “conceivable that a current or

past financial relationship between the third-party client and the debtors inspired the client’s assistance in securing [the attorney’s] representation.”

Margules is a troubling case.  Granted that existing law puts the burden on the privilege-invoker, the case raises the question as to how high that burden must be.  One would have thought that in a case where there was sworn testimony on one side and nothing but speculation on the other, the sworn testimony would have carried the day.  It did not.  Here’s hoping that a petition for leave to appeal to the Supreme Court is filed and granted.