The term “defalcation” in § 523(a)(4) of the Bankruptcy Code includes a culpable state of mind requirement involving knowledge of, or gross recklessness in respect to, the improper nature of the fiduciary behavior, the U.S. Supreme Court held recently.

Section 523(a)(4) provides that an individual cannot obtain a bankruptcy discharge from a debt “for fraud or defalcation while acting in a fiduciary capacity, embezzlement, or larceny.”  In a long-awaited decision, the Supreme Court held that the “defalcation” clause “includes a culpable state of mind requirement akin to that which accompanies application of the other terms in the same statutory phrase.”  Bullock v. BankChampaign, N.A., __ U.S. __, 133 S.Ct. 1754 (2013).

In Bullock, petitioner’s father established a trust for the benefit of petitioner and his siblings, and made petitioner the trustee.  Petitioner borrowed funds from the trust three times; all borrowed funds were repaid with interest.  His siblings obtained a judgment against him in state court for breach of fiduciary duty, though the court found no apparent malicious motive.  After the petitioner filed for bankruptcy, the respondent opposed discharge of petitioner’s state-court-imposed debts, and the Bankruptcy Court held that the debts were not dischargeable pursuant to § 523(a)(4).

Noting that dictionaries and legal authorities have disagreed as to the state of mind required for “defalcation,” the court based its decision on precedent interpreting “fraud” in the discharge-exception

statute.  “[W]here the conduct at issue does not involve bad faith, moral turpitude, or other immoral conduct, the term requires an intentional wrong,” the court said.  “We include as intentional not only conduct that the fiduciary knows is improper but also reckless conduct of the kind that the criminal law often treats as the equivalent.  Thus, we include reckless conduct of the kind set forth in the Model Penal Code.  Where actual knowledge of wrongdoing is lacking, we consider conduct as equivalent if the fiduciary ‘consciously disregards’ (or is willfully blind to) ‘a substantial and unjustifiable risk’ that his conduct will turn out to violate a fiduciary duty.”

Cancellation of a bankruptcy debtor’s debt to a wrongfully repossessing creditor is an appropriate punitive damage under § 362(k) of the Bankruptcy Code, a federal district court in Alabama has held.

In Credit Nation Lending Serv., LLC v. Nettles, 489 B.R. 239 (N.D. Ala. 2013), the creditor had repossessed the debtors’ vehicle post-petition with knowledge of the bankruptcy, had refused to return the vehicle, and on the eve of hearing had insisted that if the debtors wanted the vehicle they should 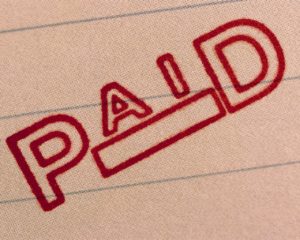 travel to another state to pick it up.  Characterizing the violation as knowing, intentional, deliberate and egregious, the court upheld the bankruptcy court’s discharge of the debtors’ $6,127.54 debt to the creditor as an award under the punitive damages clause of 11 U.S.C. § 362(k).  It rejected an argument that the debtors had not shown “actual damages” as a prerequisite to the award of punitive damages.  While the damage from loss of use of the vehicle had not been quantified, the debtors showed that they had incurred attorney fees and costs in bringing the stay-violation motion, and these suffice as actual damages for purposes of § 362(k), the court said.

A debtor’s reopening of his bankruptcy case and belated disclosure of his cause of action therein does not avoid the judicial estoppel effect of his previous non-disclosure upon his action for the undisclosed claim in state court, the Supreme Court of Idaho has held.

In McCallister v. Dixon, 2013 WL 427437 (Idaho 2013), the Chapter 13 debtor failed to disclose a potential medical malpractice claim but then filed suit upon it after his plan had been confirmed.

When his suit was met with a defense invoking the judicial estoppel doctrine, he attempted to avoid that doctrine by reopening the bankruptcy and making the disclosure.  The Idaho court said that was not enough, and it rejected an argument that the tort defendants had not been prejudiced by the omission.  “Judicial estoppel protects the integrity of the judicial system, not the litigants; therefore, it is not necessary to demonstrate individual prejudice,” the court said.  See also Sharp Thinking No. 81 (Jan. 2013); No. 57 (Feb. 2012).

Punitive damages of more than $1.3 million have been affirmed against a mortgagee that incorrectly but apparently routinely misapplied Chapter 13 plan payments to pre- and post-petition charges that it imposed without notice to the debtor or leave of court.

Noting that Wells Fargo “is a sophisticated lender . . . familiar with the provisions of the Bankruptcy Code, particularly those regarding automatic stay”; that lesser resolutions had been ineffective; and that Wells Fargo’s own representatives had admitted the misapplications were routinely made, the court said the multiplier of 10 was not improper.