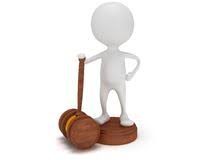 A complaint which alleges wrongs against multiple defendants collectively, without details about who did what, fails the requirement of plausibility which Supreme Court cases have imported into Federal Rules of Civil Procedure 12(b)(6), the U.S. Court of Appeals for the Seventh Circuit has held.

“Liability is personal,” said the court in Bank of Am. v. Knight, 725 F.3d 815 (7th Cir. 2013).  “Each defendant is entitled to know what he or she did that is asserted to be wrongful.  A complaint based on a theory of collective responsibility must be dismissed.”

Construing those principles to be required under the new pleading standards set down in Ashcroft v. Iqbal, 556 U.S. 662 (2009), and Bell Atl. Corp. v. Twombly, 550 U.S. 544 (2007) (see Sharp Thinking No. 41 (January 2011), the court even applied the doctrine to conspiracy cases.  “Although every conspirator is responsible for others’ acts within the scope of the agreement, it remains essential to show that a particular defendant joined the conspiracy and knew of its scope,” it said.

The common answer that “defendant neither admits nor denies paragraph X, but demands strict proof thereof” is improper in civil cases and “the words ‘demand strict proof’ do not belong anywhere” in a properly-drafted civil answer, a panel in the Appellate Court’s First District has ruled.

Finally voicing a principle effected by adoption of the Civil Practice Act some 60 years ago, Parkway B.&T. Co. v. Korzen, 2013 IL App (1st) 130380, concludes that defendants in civil suits are not allowed to “demand strict proof” of facts they know are true.  “Unlike criminal defendants, who can remain mute and require the State to prove them guilty, civil defendants must answer a complaint truthfully and in good faith, even if that means undermining their own interests,” the court said.

The “self-critical analysis privilege” recognized in some federal courts has received another non-recognition decision in Illinois’ Appellate Court.  Harris v. One Hope United, Inc., 2013 IL App (1st) 131152, concludes that “the self-critical analysis privilege is not recognized in Illinois” despite the federal authority.  Where recognized, the privilege has been intended to encourage institutions “to engage in candid and often times critical internal investigations of their own possible wrong doings,” the court noted.

Service on Secretary of State Permissible in Some Cases

Service of process upon the Secretary of State may be appropriate under 735 ILCS 5/2-203.1, even where the defendant is an Illinois resident, but the plaintiff must strictly comply with the statutory prerequisites and its moving papers must show that compliance in detail, a panel in the Appellate Court’s First District held recently.

Imposing a requirement of detailed showing analogous to that applied for publication service in Deutsche Bank Nat’l Trust Co. v. Brewer, 2012 IL App (1st) 111213 (see Sharp Thinking No. 69 (August 2012)), the court in Sutton v. Ekong, 2013 IL App (1st) 121975, said that before resorting to such service, the plaintiff, in addition to being frustrated in attempts to serve the defendant at home, must attempt to learn the defendant’s business address and attempt to effectuate service there.  Because the defendant’s business address was readily discoverable, the court held that the prerequisites to service on the Secretary of State had not been met and vacated the resulting judgment.

A workers’ compensation insurer’s claim file, “made in the regular course of business processing” of an employee’s workers’ comp claim, is not protected by Illinois’ work-product doctrine, at least when the claimed protection is asserted in a subsequent retaliatory discharge civil case, the majority of a panel in the Appellate Court’s Fifth District has ruled.

In a decision likely to send shock waves through the workers’ comp bar, the panel said “there was nothing in the record to suggest that the claim file was generated in preparation for trial” – suggesting that hearings before the workers’ comp commission do not qualify.  Moreover, the majority said, the file did not disclose the “theories, mental impressions, or litigation plans” of the defendant’s attorney – seeming to suggest that theories, mental impressions and litigation plans of the party or its worker’s comp insurer are not protected.  Holland v. Schwan’s Home Serv., Inc., 2013 IL App (5th) 110560.

A punitive damage award of $3.6 million – based on a compensatory award of $660,400 – is not improper under either the common law or the Due Process Clause, where the punitive award was only 1% of the defendant’s net worth and was supported by “a pattern of willful and wanton disregard for [the plaintiff’s] rights as an injured worker, including his protection against termination for exercising his rights under the [workers’ compensation] statute,” the Holland majority also held.

“The conduct of Schwan’s agents and employees in handling Holland’s workers’ compensation claim evidence an intent on the part of Schwan’s to deny him the protections afforded to him under the Workers’ Compensation Act,” it wrote.  “The evidence of Schwan’s flagrant disregard for an injured employee’s statutory rights was sufficiently reprehensible and warranted a significant amount of punitive damages.  The evidence . . . supports a finding by the jury that Schwan’s acted with an intentional motive in retaliating against Holland.”

The majority also rejected an argument that the punitive damages should be on the order of the cap applied under Title VII employment cases.  “The legislature designed the Workers’ Compensation Act to provide protection to injured workers,” it said, “and punitive damages play a crucial role in protecting against violations of the Workers’ Compensation Act’s statutory scheme.”